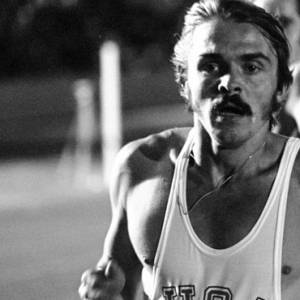 Did you know that Steve Prefontaine was never a runner? He was a rebel that happened to get into running and was very good at doing it! He had swagger and was an icon as a record holder for long-distance events. Whether he was running two kilometers or ten, Prefontaine was, quite simply, a legend. He put in the work and because of that, became someone to aspire to be.

There’s a lot that we have discovered about Steve Prefontaine in recent years, and below you'll find five interesting facts about Steve.

The First Signature Athlete For Nike

Back in 1974, Nike was hunting for an athlete to wear their running shoes. They found Steve Prefontaine and signed with him for $5,000. Prefontaine had become a fantastic athlete under the watchful eye of Bill Bowerman, the sports coach at the University of Oregon - who also happened to be the co-founder for Nike! He wore the Montreal spikes and the Boston flats, and it was Prefontaine that made the running shoes with Nike famous.

During his keynote address at Oregon, Prefontaine made sure his goal of the speech was directed specifically to the athletes in the audience. He wanted to make sure that these athletes walked away from the speech understanding his three key factors to success: have a good diet, train hard and be sure let your body recover and rest. Prefontaine also talked about how important it was to train as an individual as well as a team.

Check out our custom track and field uniforms today!

As Prefontaine is affiliated with the Nike name, it's okay to assume he would have only worn the Nike brand. However, before Nike, Prefontaine wore other brands including Puma, Adidas and Onitsuka Tigers. He spent some of the best moments of his career in a variety of trainers, from the 3oz trainers that were hand-made by Bowerman to the Adidas shoes he wore for the 1972 Munich Olympics.

As Prefontaine was so ingrained in Nike's legacy, Nike paid tribute to him and Bowerman along with Knight and Bill with the 2007 Nike Vintage Collection. Some of the most famed runners from the late '70s were profiled for the tribute. The whole tribute was fitting for these athletes, and it was fashionable for the time, too.

Steve Prefontaine passed away at the age of 24, in his prime as an athlete. The facts about him show him to be a legend on the track - even if he didn't initially set out to be.