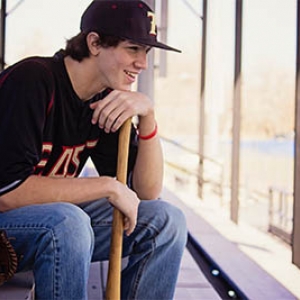 Most sports legends have a superstition or two when it comes to their pre-game ritual. Some people like to count; others want to go through the motions of exercise. Baseball players also have some strange routines, from odd food eating rituals to putting baseball cards in their shoes, being necessary for others. Let's check out nine funny and interesting baseball good luck rituals performed by some of the best to ever play the game!

No matter where he was playing or when, Wade would eat chicken before every baseball game which is why he was given the nickname, "Chicken Man." He would also run wind sprints at exactly 7:17pm.

During pitching, Wendell would chew four pieces of black licorice. He would spit them out at each inning, too!

Walker had a fixation on the number "3." All of his alarms were set to 33 minutes on the hour, he wore number 33 on his custom baseball uniform and was married on Nov 3, too!

Barmes had a little quirk after twisting his ankle during a game. He had his ankle taped after the sprain and his hitting game improved during that same time. Barmes believed it was due to having his ankle taped, so he kept it taped every game - even after he healed.

Only playing 41 games, this outfielder had a reputation for being superstitious. His particular quirk was that if anyone touched him, he HAD to touch them back - even if that meant waiting until the end of the game to find the person who had touched him during play. He also refused to make right turns, preferring to run a full circle to his left to go right in the end.

Any time Marquis spit on the field, he had to avoid the mound. If he caught the mound by accident, he had to wipe it with his shoe. He would also unbutton his jacket if his team was ahead.

Some rituals on the field are simple, but Crisp had a complicated little routine before each game. He would pick up the dirt at-bat, spit in his hands wiggle his fingers as if they've gone sleepy and then stamps his foot. It helps him to relax before he has to hit.

Torrealba has habits from the moment he leaves the dugout. He would take a drink of water from a paper cup. He then tosses the cup, and if it doesn't land the right way up, he doesn't think he will hit the ball. He also chews gum before aiming with his bat; if it connects, he believes he will have a hit.

Grilli would put two-sided baseball cards in his shoes during his days at Little League. If Nolan Ryan was face-up, those were the days that Grilli pitched. On other days, Griffey was face-up, believing they would help him to pitch. Before every game as a starting pitcher, he would eat linguine with clam sauce before every game.