Who Was Pistol Pete?

Home › Blog › Who Was Pistol Pete? 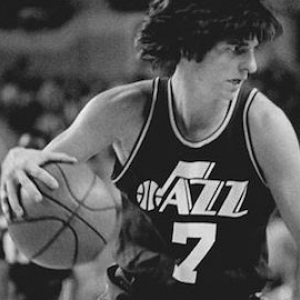 What is it that brings spectators coming back to basketball over and over again? Is it the fast paced and exciting action? Is it the drama? Is it the skill, dexterity and athleticism we see from the players? Or is it the flamboyant personalities that the game seems to attract? While it’s probably a little bit of all of the above, it’s hard to deny that the basketball court has played host to some of the greatest athletes and showmen of sporting history. These are the people who make us want to throw on our own custom basketball jerseys and want to start a league of our own. They’re the people who inspire us to push past what we think are our physical and psychological limits and be the best that we can be. While the likes of Michael Jordan, Shaquille O’Neal and Elgin Baylor need no introduction, here we pay tribute to a lesser known NBA all star, Peter “Pistol Pete” Maravich.

His Nickname Comes from His Unique Shooting Motion
Many would assume that the term “pistol” alludes to the speed and power with which he threw the ball, and while he was certainly a player with a reputation for power, the epithet actually comes from the unique way in which he used to shoot. Traditional shooting technique comes from the core, arms and shoulders using power and momentum that travel up from the legs. Pete’s unique form began from his hip, like a gunman pulling a pistol from its holster.

He Was a Showman Who Brought New Interest to the NBA

The nature of basketball allows for trick shots, extravagant passes and fancy ball handling. While Maravich was far from the first player to employ such extravagant play, he quickly earned a reputation for showmanship which drew new spectators to the sport. His reputation for backwards dribbling, between the legs passing and circus shots were far less common in the early to mid ‘70s when Pistol Pete was in his prime. While some detractors dismissed him as all style and no substance, his consistently great fundamentals and impressive score record rebuffed those claims.

While Pistol Pete Maravich is fondly remembered for his accomplishments in the NBA they are preceded by an extremely illustrious college basketball career. In fact, he still holds nearly every major NCAA scoring record. He holds the record for most career points (3,667), highest career scoring average (44.2 ppg), most field goals attempted (3,166) and made (1,387) as well as most career 50-point games (28). This is doubly impressive when you consider that Maravich’s college play precedes the three-point basket, which wasn't introduced in college play until 1986.

Finally, Pistol Pete’s outstanding college career won him the most lucrative pro contract ever offered to a college player at the time. He was signed to the Atlanta Hawks for a cool $1.9 million in 1970. That’s almost $12.5M in today’s money!