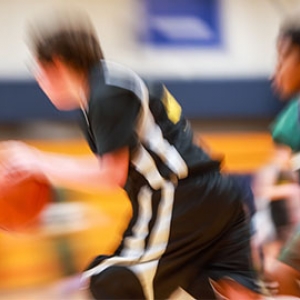 Taking a shot is potentially the most glorious moment in basketball. When the ball passes through the net with that perfect ‘swish’ sound it’s the stuff that dreams are made of for many aspiring young players. But, when taking a shot in-game it can also be a tremendous source of pressure for young players, especially those who are less than confident in their abilities. Thus, shooting drills and games are an important tool in every coach’s repertoire. Not only do they help players to hone the finer points on shooting technique, they also help them to build confidence in their abilities so that they can take their shots with confidence.

Here are a few of our favorite shooting games…

Bouncing shots off the backboard is a skill in and of itself. However, perfecting the arc necessary for a ‘swish’ shot is an important skill that all players must master for their offensive game. This is a fun drill that not only gives kids a pressure-free environment in which to take fast shots, it also allows them to master taking shots from different angles.

Players get into three separate lines a few feet away from the basket with their own ball. Players then take turns taking their shot at the basket, all aiming to get that the perfect swish on their shot. After each player takes a shot, they move either to the back of the line they’ve just come from or you can have them rotate clockwise or counterclockwise.

Layups are an extremely important skill to master, especially in the youth game. This game teaches players to finish layups at full speed and under intense pressure. The drill starts out with two lines of players down each end of the court, with one ball between each line. One line is playing offense while the other plays defense.

Basketball shots are multifaceted and players must get used to taking shots from different angles under different circumstances. This drill combines the honing of shooting skills along with footwork skills. The coach passes to players who immediately perform a jump stop. Jump stops are an important skill to learn as having both feet land at the same time allows players more freedom when pivoting. Upon receiving the pass, the player will then pivot around to square up to the basket.

Players start off by making two lines at the baseline with a coach/assistant coach in front of each line. Every player has a ball of their own. The player passes to the coach then immediately dashes to the free-throw line where the coach will pass back to them. Catching the ball in a jump stop, the player will then pivot around to square up to the basket before taking their shot or attacking the ring (your choice).

These drills will help players to improve their shooting skills while also helping them to communicate with each other and work as a team.